It is not for nothing that CSMVS (Chhatrapati Shivaji Maharaja Vastu Sangralaya) Mumbai  is India’s best museum. The museum is home to more than 60,000 treasures, that tell the amazing story of India.  Get the best of your CSMVS experience with these 10 things to see, as recommended by the museum’s director Mr. Sabyasachi Mukherjee! This article has been possible because of a recent collaboration with the Harper’s Bazaar Magazine. For their 9th anniversary issue, we spoke to Mr. Sabyasachi Mukherjee who started his association with CSMVS as an intern in 1990 and rose to the position of its Director; a visionary who turned around the fate of this once-crumbling structure into a museum with a reputation of hosting blockbuster exhibitions;  an inspiring leader who brought his team together like a family, setting many a benchmark for museums in India. The most endearing characteristic of Mr. Mukherjee is his humility, as he stresses on his role of a mere caretaker of a public institution.

Pin This Guide to CSMVS Mumbai with the top 10 picks from the Museum’s Director! The Mirpurkhas sculptures come highly recommended as a must-see for their unique aesthetic & historical value. Perhaps the only ones to come from an archaeological site, these sculptures reached the Museum much before India became Independent.  The sculptures were recovered from the niches of a collapsed Stupa at Kahu-jo-daro near Mirpurkhas (Sind, Pakistan).  Once upon a time, these sculptures must have decorated the walls of the 5th / 6th century Stupa.

Mahisasur Mardini, from the Elephanta Caves

Even though this is a partly broken sculpture, the detailing and craftsmanship is mind-blowing! Did you know, that the tails of cattle curl up in times of anxiety? The artist skilfully portrays this detail in the sculpture conveying the emotion and effect of the Goddess on the buffalo-demon. The firmly positioned legs of the Goddess, and the depiction of her forceful attack conveys a certain strength and vigour and leaves the viewer trying to imagine the magnificence of the entire sculpture!

CSMVS has the largest collection of  miniatures by Nainsukh, the Pahari (hill) painter.  His artworks, characterised by a nude background mainly feature Raja Balwant Singh as the main character. This is also because the Raja was one of his most important patrons, who employed Nainsukh for 20 years! Can you imagine working for someone that long?

The relationship between the art-loving Balwant Singh and Nainsukh must have been very close, since Nainsukh seems to have access to intimate moments of the Raja’s everyday life.  Apart from the conventional scenes, such as showing the raja hunting with a troop or watching dancers, paintings by Nainsukh show the Raja getting his beard trimmed, writing a letter, performing a puja, looking out of a palace window, sitting in front of the fire wrapped in a blanket, or smoking a hookah and inspecting a painting!

Translated to english, the painter’s name Nain (eyes) Sukh (pleasure) means “pleasure to the eyes” and indeed, he stayed true to his name!

Part text, part visual these manuscripts are an inspiration for graphic designers even today! Paper introduced to India only after the 10th century and replaced the originally used palm-leaf. While the Kalpasutra is a biographical account of Mahavira and other Jain Tirthankaras; the Kalakacharya Katha tells the story of a famed jain monk. 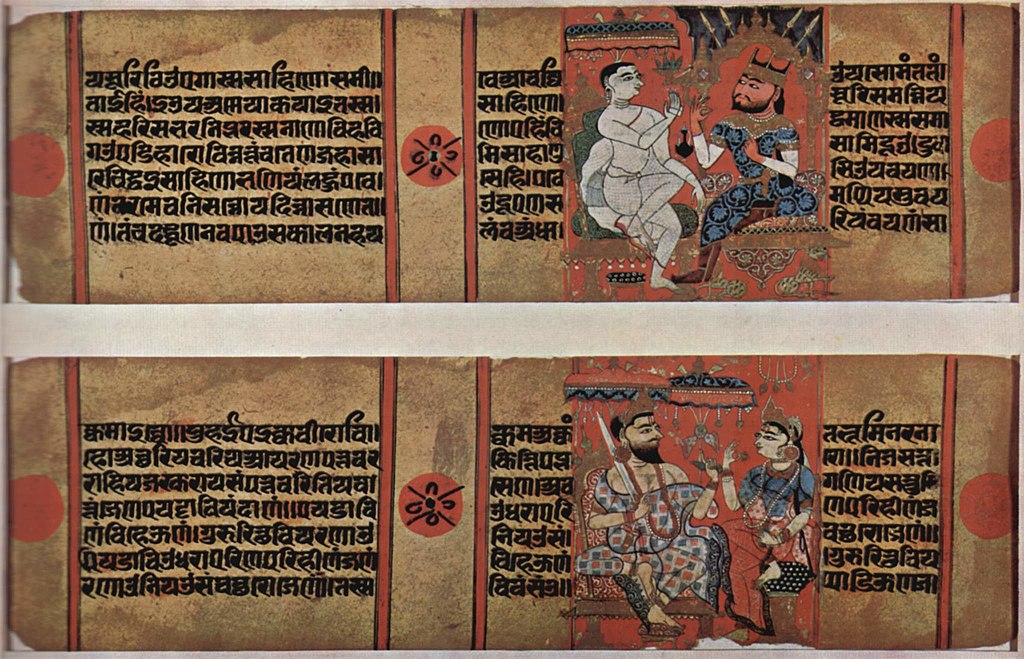 Nagapattinam, a coastal town in Tamil Nadu, was a significant trade-centre during the ancient times. The settlement was an important part of the Chola dynasty, one of the longest reigning empires in South India. This particular sculpture comes from a Stupa built by a Chinese King for Chinese traders who traveled to Nagapattinam during the rule of Narsimavarman II (a Pallava dynasty King).

Marco Polo corroborated this in his travelogue, indicating that a large number of Chinese traders would visit the Southern coast of India and needed a place of worship, similar to their own. And so, this image of Buddha has more Chinese influence than Indian.

This armour is probably the most photographed object in the Museum. Moulded to the shape of Akbar’s torso, the object gives you a clear picture of the Great Emperor’s body-structure. His shield also shares another aspect about the King – his interest in astrology is evident by the zodiacs inscribed on it . The high neck collar added to the breastplate was supposedly not a common feature in Indian armour.  On either side of the rib, you can spot inscriptions from the Koran in Nastaliq script. There’s another inscription on the collar that almost reads like a garment-label. It says :

Fun Fact: Did you know, Akbar was very conscious of the quality of his armour, and would often gift swords from his collection!

The earliest available historical sword in the country, Khilji’s sword (Khanda) is a must-see too!

King Songtsen Gampo who died sometime around AD 650 introduced Buddhism to Tibet under the influence of his two wives (from China and Nepal). The Queen brought with her, an image of Buddha from China, the first to ever reach Tibet! King Songtsen was worshiped by the people of Tibet as Avalokiteshvara, the great protector of Tibet. The images of the King appearing after his death would show him with a high crown including the head of a Buddha. This particular sculpture is special because it is one of the only 2 such surviving ones. One of the earliest such images of the King was a life-size terracotta figure accompanied by his two wives & used to be installed at Lhasa but has been destroyed now. Another sculpture of the King is part of the LACMA collection, and then there’s this one at CSMVS!

The Textiles  to see at CSMVS : Director’s Picks

There are two sarees that the Director particularly holds as his favourites.

A Saree, designed by the famous artist Nandalal Bose & executed by his daughter in Batik style

#Day20 of #WomensHistoryMonth brings this sari designed by Nandalal Bose for a performance to be staged in front of Gurudev Tagore. His daughter Gauri executed it in Batik. pic.twitter.com/ALYgYxFqUt

A Baluchari  saree from the Tagore family Jnanadanandini Devi was a social reformer, who pioneered various cultural innovations and set forth a movement for women’s empowerment. If you’ve seen ( and drooled over ) the Bengali way of draping sarees, it is all credit to her! Denied entry into an elite British Club for her traditional dressing, she went on to introduce the “blouse” as a  component and became a style icon!

The European painting gallery is where you realise why Indian paintings of the same period are called “miniatures”. These oil paintings are huge; and this painting by the 19th century French artist Antoine Dubost is one of the museum’s most important possessions and its only neo-classical painting.

Fun Fact: This painting took seven years to conserve, and that is when the name of the artist was revealed !

CSMVS has the largest collection of paintings by Pestonji Bomanjee’s paintings and one can spend an entire hour just admiring these! As the name suggests, Pestonji was a Parsee artist, and his contribution to the Bombay school of art is priceless.  His use of light in the paintings can beat any Instagram filter, lending a magical touch to the scene.

Try a jigsaw puzzle based on this painting!

That’s all folks! Next time you’re headed to CSMVS Mumbai and don’t know where to begin, let this guide help you! Write to us at [email protected] to share your CSMVS favourites, and we’ll include them in our upcoming Visitor’s Guide to CSMVS!