Each year on January 26, India celebrates its Republic Day marking the end of its transition into an independent and sovereign country.  In 1950, the Constitution of India came into effect turning this day into the biggest national celebration. Can you imagine what the first Republic Day would have been like?

Here are some memorable moments & fun facts from the first Republic Day of India:

1. Dr. Rajendra Prasad was sworn in as India’s first President

In the capital, Delhi, the day began with the 34th and last Governor-General of India, Chakravarti Rajagopalachari, reading out a proclamation announcing the birth of the Republic of India. The new President, Dr Rajendra Prasad, then took the oath of office.

Activity Suggestion : Get children familiar with those who contributed to the formation of India. Begin with identifying the people in the cartoon, and proceed to digging deeper on their roles. Does their contribution have anything to do with their position in the image? You can also get kids to make their own cartoon based on the present-day Republic Day!

Dr. Rajendra Prasad addressed the crowd first in Hindi, and then in English.

Today, for the first time in our long and chequered history,” he said, “we find the whole of this vast land… brought together under the jurisdiction of one constitution and one union which takes over responsibility for the welfare of more than 320 million men and women who inhabit it. 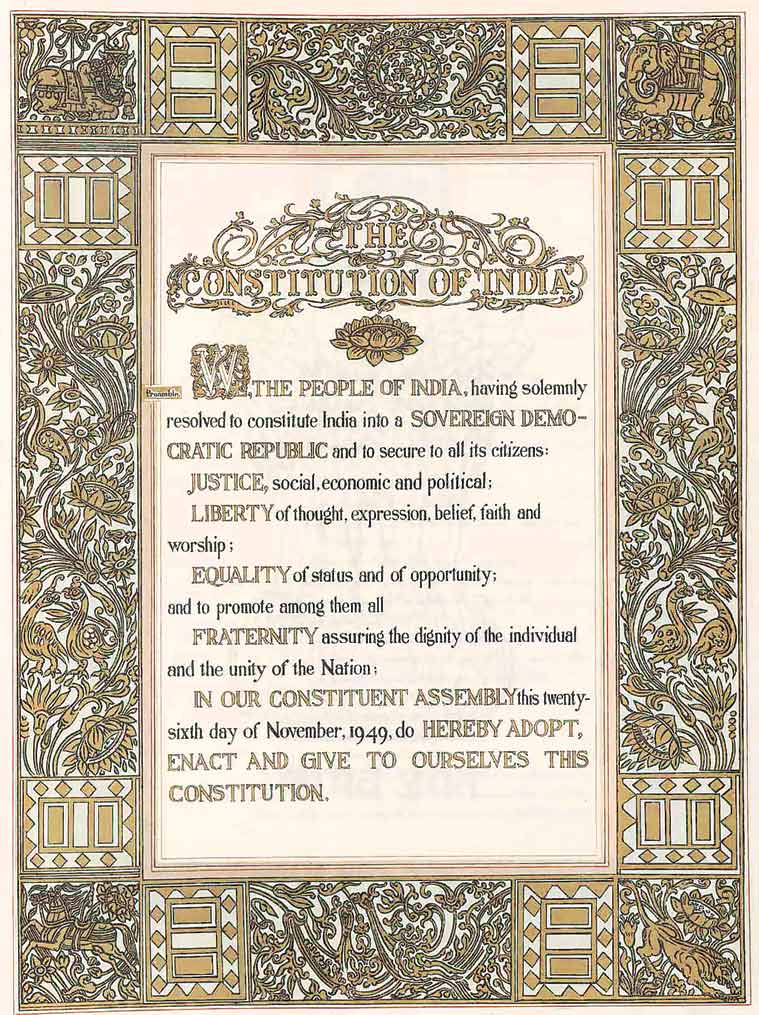 The Constitution of India, was envisioned as not just a governing document, but something that would also represent India’s rich heritage. It remains to be the only Constitution in the world which is handwritten and illustrated. The drawings and motifs are said to have been inspired by the murals of Ajanta caves & the miniature paintings.

2.  The Venue of the first Republic Day Parade was Irwin Stadium (renamed now as National Stadium)

Dr. Prasad drove to the venue in his state coach, greeted by thousands of people along the way. Rajpath wasn’t always where the parade was held. From 1950 to 1954, the celebrations were organised at different venues including Irwin Stadium, Kingsway, Red Fort and Ramlila Grounds. It was only after the parade in 1955 that Rajpath became the permanent venue. Notice the Indian emblem on the carriage? It was changed on this day from the British Royal emblem! The carriage was drawn by 6 Australian horses!

The first Republic Day was celebrated at Irwin Stadium, now known as the Major Dhyan Chand National Stadium. As the President travelled to the Stadium, he was escorted by a Cavalry:

3. The Grand Parade by the Armed Forces

On reaching the Stadium, Dr. Rajendra Prasad was welcomed with a 31-gun salute. Then, on a Jeep, he proceeded to take a round of the Amphitheatre, saluting 3000 members of the armed forces who had gathered there. The armed forces put up a spectacular and grand Parade.

Activity Suggestion : Familiarise the little ones with India’s Armed Forces! Download this Activity Sheet for matching-games & a colouring sheet ! Interestingly this year too, the Chief Guest for our Republic Day celebrations is the Indonesian President. India and Indonesia’s ties go way back into history, and this was one of the reasons why Dr. Sukarno was invited to grace the occasion. Take a look at this fascinating gift he brought for Dr. Rajendra Prasad.

Activity Suggestion : As a parent / educator, this is a good start to encouraging your children to learn about India’s relationship with the world. How has India contributed to the world, and how have world-developments impacted India? Here’s an example of how India and Indonesia share common roots and heritage.

5. The first Republic Day celebrations were over in about 2 hours!

Republic Day Tableaus are a great way to learn about different states in India, their culture and heritage. It is the biggest show of India’s diversity! This year, I got my kids to think of what aspect of their State-Heritage would they like to showcase, and they made their own tableaus using shoeboxes! But would you believe it, back in 1950, there were no tableaus or performances at the celebrations, but yet, people were jubilant. In Connaught Place, people of all age groups thronged the streets and crowded restaurants; shops remained illuminated through the day while the Rashtrapati Bhavan lit up at night – just as it continues to be, even today. This was the biggest national celebration – after all,   India was the first Commonwealth country to have entirely come into its own.

Activity Suggestion : This is an excellent short video to show to your kids and ask them to identify the similar. You could also do a reflective exercise on how the sentiment, public participation and celebrations have changed over time.

Republic of Art : The Constitution as a work of art

Nandalal Bose : The Man who Illustrated the Constitution (ActivitySheet included)