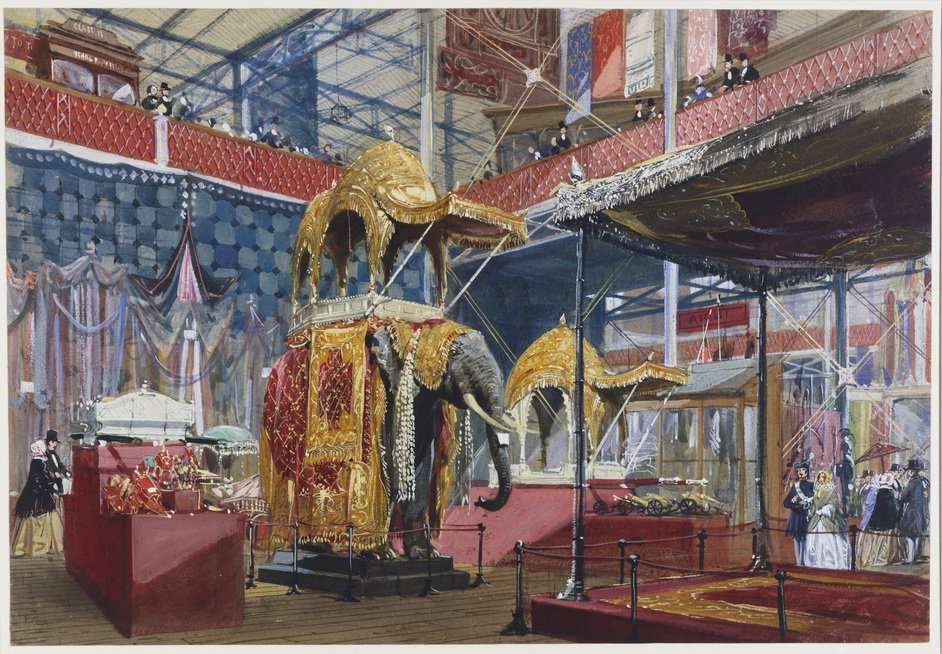 It is not often that the Victoria and Albert Museum (V&A) puts on an exhibition about a member of its own staff. But this is no ordinary exhibition. It celebrates the work and life of a man who fathered a Nobel Prize-winning author who wrote the endearing “Jungle Book” which continues to fascinate every child in India till date. This celebrated staff member is none other than Lockwood Kipling, who worked with the museum when it was still called the South Kensington Museum. Not only did he shape the original collection but he also helped decorate the South Kensington building (with terracotta sculptures). You can spot a bearded-Kipling in a mosaic near the Museum’s John Madejski garden. This exhibition displays his love for India which rubbed off on his son Rudyard Kipling in a way we have continued to love; and traces his journey as an artist, teacher, and campaigner for the preservation of the arts and crafts of India.

The Great Exhibition of 1851

In 1851, John Lockwood Kipling attended “The Great Exhibition” at Crystal Palace and the Indian treasures on display changed his life forever. The exhibition was put together by the British East India Company to open up new markets for Indian crafts and materials.

Inspired by the exquisite arts of India, Lockwood decided to pursue a career in the arts and eventually travelled to India in 1865. He joined the J.J School of Art in Mumbai as a teacher. The city at that time was booming and cotton exports out of Bombay was at its peak. With development comes the rise of buildings – and in this case many of them shot up in the existing Gothic Revival style. Lockwood Kipling designed sculptural decorations for many of them including the Victoria Terminus, now called the Chhatrapati Shivaji Railway station.

In the years to follow, Kipling Senior traveled extensively around India and its villages, documenting the crafts in his drawings. His documentation of artists from the North-Western Provinces are especially endearing. He became a campaigner for preserving the traditional arts of India.

It is therefore no surprise that Lockwood’s children who were born in India, grew up surrounded by the works of the Indian art he had collected, the artists he trained and promoted, the stories he told, and the images he recorded of traditional craft workers.

On display also, are a few of the 300 paintings he and his students copied of the murals at the Ajanta Caves and the many drawings of mosques, monuments and local buildings. He encouraged his students to document these, fearing the loss of tradition.

After a 10-year stint in Bombay, John Kipling moved to Lahore in 1875 to become Principal of the Mayo School of Art (now Pakistan’s National College of Arts) and Chief Curator of the Lahore Central Museum. Such is his legacy, that even today, the name “Kipling” in Lahore alludes to the father and not the famous son.

At the Mayo School he and his staff recruited talented students from the surrounding area. He pioneered an entirely new approach to art education using the museum’s collections and the city’s architecture as sources for students to study and copy.

As Chief Curator of the museum Kipling developed and expanded the reference library as well as the museum’s collections. Working closely with his colleague Bhai Ram Singh, he organised the design and construction of new buildings for both the museum and the art school.

In the late 1860s and early 1870s many craft traditions were in decline. To ensure their preservation, Kipling encouraged his students to focus on regional crafts such as wood carving, carpentry and textiles. He also salvaged (from buildings which were being demolished) architectural features and contemporary objects  such as detailed carved doors, windows and screens both for the Lahore museum and for the V&A’s collections. Several of these have been conserved for the exhibition; a late 18th century bay window from a merchant’s house and a late 19th century plaster cast of a 1st -2nd century bust of Buddha are displayed for the first time in 60 years.

In 1893 Lockwood Kipling retired from his position in Lahore and moved home to England where he contributed to Rudyard’s stories about India both with his recollections and illustrating some of the stories, the first and the second Jungle Book and Kim.

The illustrations were created through an intense process of carving them as relief sculptures and then photographing them. Several of his original clay sculptures are on display including his design for his own book plate, a self portrait of a happy man reading a book, wreathed in pipe smoke, under the text Fumus Gloria Mundi.

The exhibition concludes with furniture and design relating to royal commissions that Kipling worked on with his former student, the architect Bhai Ram Singh: the Indian billiard room for the Duke of Connaught at Bagshot Park in Surrey and the Durbar Hall at Osborne. The rooms are represented through film and original designs and furniture, including a pair of standing lamps and a pair of fire dogs designed for Osborne and a chair designed for Bagshot Park, recently acquired into the V&A’s collections.

While this exhibition offers takes you through a journey of Lockwood Kipling’s career, it also acknowledges the contributions of his wife Alice MacDonald and her connection with the arts. There is a large embroidered panel she is supposed to have made for the Red House (home of the famous William Morris, who himself was a champion for the crafts)

The exhibition is on till April 2, 2017. You never know what will inspire you to travel and carve out a different life 🙂

The Victoria and Albert Museum (V&A), London has collaborated with the Bard Graduate Center, New York to present the exhibition.