Mohan Das Karamchand Gandhi , a global icon for peace was assassinated on January 30, 1948 by Nathuram Godse, sending an entire nation into shock, disbelief & grief. As India  remembers ‘bapu’ in significant ways today,  here’s a celebrating his life and philosophy through 5 iconic artworks that are a tribute to his indelible memory. There are so many artists who have been influenced by Gandhi’s life, and ideals and each one’s experience of Gandhi has been different. Yet, a common denominator amidst artists is their admiration and respect for a leader who is an inspiration to people globally.

Nandalal Bose had a close relationship with Gandhi and shared many of his ideals. Bose’s image of Gandhi is one of the most iconic images of the 20th Century; as iconic as the portraits of Che Guevara and Chairman Mao, demonstrating the power of mass medium (printmaking) to mass mobilize. Nandalal Bose was among the first to recognize that the image of Gandhi alone had the potential to unify a movement to express the collective will of a new nation. 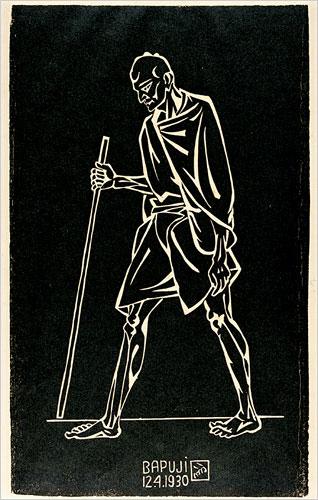 In this image, Nandalal Bose captured the Dandi March – a crucial moment in India’s struggle for independence. Here’s how we got students to pay tribute to Gandhi through art inspired by Nandalal Bose:

A personal favorite amidst the depictions of the historic Dandi March is the Gyarah Murti – the bronze sculpture literally freezes the moment in time and remains to be a landmark in Delhi. Looking at the sculpture, one can immediately feel the “movement”, a sense of urgency and determination conveyed beautifully through the several characters in the march.  Devi Prasad Roychowdhury, unfortunately passed away before the sculpture could be completed and his wife and students completed this endeavour.

Raza was barely eight years old when he first saw Mahatma Gandhi in his village Mandla, Madhya Pradesh. The Mahatma had come there to address a public meeting during the freedom struggle of India. Even though Raza never got a chance to meet Gandhi, he was deeply influenced by Gandhian philosophy. The impact of Gandhi was such, that in the wake of India’s Partition, even as Raza’s brothers, a sister, and his first wife decided to move to Pakistan, he refused to move. He felt leaving India would be betraying Gandhi. It is no surprise then, that painting in his 90s too, Raza kept using words and phrases associated with the Mahatma. In 2013, Raza executed a series of seven paintings as a tribute to Gandhi. With India’s independence in 1947, Hussain too, got his first big break – his first exhibition! As he joined the Bombay Progressive Artists Group, the desire to create a new language of modern art for a new country emerged even stronger. The Progressive painters led a political movement of sorts. Husain had watched Gandhi and Jinnah speak at rallies in Bombay and was deeply committed to the ideas that India stood for.  Hussain  developed the “thick lines” that would define his art, by looking at the sculptures of Khajuraho. His fascination for Indian subjects, and references to the nation’s philosophies have often been the subject of his many controversial paintings. Sadly, Hussain remains to be India’s most misunderstood artists. 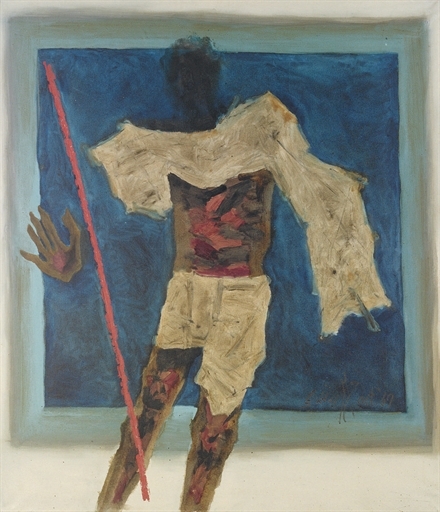 5. Monumental Gandhi : a sculpture by A.Ramachandran

A. Ramachandran’s seven-foot plus bronze sculpture of Gandhi is a poignant depiction of his last moments. On its back, the sculpture has a bullet hole and Gandhi’s famous parting phrase ‘Hey Ram’ engraved. The sculpture stands on a wooden base on which  Albert Einstein’s tribute to Gandhi is carved in bold letters:

Generations to come, it may well be, will scarce believe that such a man as this one ever in flesh and blood walked upon this Earth.

A young A.Ramachandran was influenced by his school-teacher who held Gandhi in high regard. Later, at Kala Bhavan, the art of Nandalal Bose would further influence him. The Dandi-March sculpture by his mentor, Ramkinker Baij would be yet another iconic piece that would remain in his thoughts.

But while the earlier artists portrayed Gandhi to be a Hero / Leader fuelling the pride and patriotic feelings ,  this particular sculpture exalts Gandhi’s stature as an icon of Peace. The stillness of the sculpture as against the ‘movement’ in others, truly sets it apart as it fills the viewer with a sense of calm.

Gandhi continues to inspire artists even today. Through their works, many contemporary artists keep Mahatma Gandhi alive.  Artists such as Subodh Gupta, Atul Dodiya and Veer Munshi are just a few examples.

Last year, this amazing mural of Gandhi took many Mumbaikars by surprise!

As part of the St+Art India project, this was created by Brazilian artist. Eduardo Kobra.

While some hail Gandhi as a saint-like icon, others believe his philosophy is irrelevant today. But what you can’t disagree with, is, that 70 years after his death, his memory lives on and serves as an inspiration and also as a warning.

Have something to say? Write to us at [email protected] !

If you have a favourite Gandhi-inspired artwork, don’t forget to share it with us! Use #MahatmaGandhiArt !

Gandhi, through the photographs of Kulwant Roy