This M.F Husain Painting is Inspired by India’s most Famous Tiger : Tipu Sultan!

Comes from a plaything of the Emperor’s choice,

From a Man-Tiger Organ, prettiest of his toys.

The famous poet John Keats and M.F Husain were among the many artists to have been inspired by a magnificent 18th-century wooden toy, titled “Tipu’s Tiger”.

‘Tipu’s Tiger’ is inarguably one of the most striking treasures of the Victoria & Albert Museum, London. This wooden-mechanical toy was created for Tipu Sultan – the ruler of the Mysore Kingdom. It was one of his many belongings that ended up being divided as war booty amidst his colonial enemies.

The fascinating toy reveals Tipu Sultan’s obsessive love for tigers, and equally passionate hatred for the British. It also speaks volumes of the craftsmanship, technology and genius that existed in the Mysore court during his rule.  The many layers of symbolism hidden in this simple-looking, jewel-ridden possession make it one of the most popular and cult objects from history.

Tipu Sultan, the Tiger of Mysore

According to legend, Tipu was once hunting with a French friend when he came face to face with a tiger. When he realised his gun wasn’t functioning, he held off the tiger with his bare hands till he could pull a dagger for use. This act is believed to have earned him the tag of ‘Tiger of Mysore’. 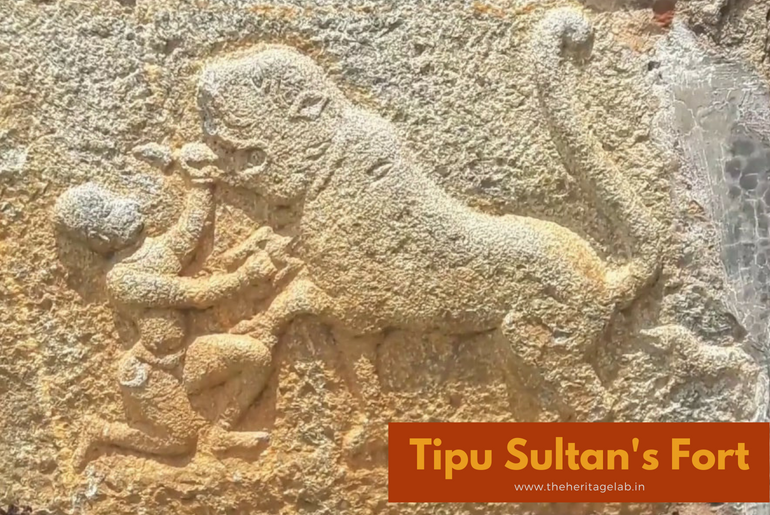 Tipu went on to tame tigers as pets and adopted the animal as his official emblem.  Tiger motifs made a common appearance on his soldiers’ uniforms, weapons and even the palace interiors! There’s also talk about how Tipu Sultan equalled himself to a Gazi saint. Interestingly, the Gazi scroll too, depicts the saint on a tiger!

Tipu’s Tiger was designed to encapsulate the fear and terror the Sultan inspired amidst the British. The savagery of the tiger attacking it’s unfortunate victim (identifiable as a British soldier) was a reflection of Tipu’s own military prowess . He fought 3 separate wars against the East India company (the Anglo-Mysore Wars) in the last two decades of the 18th century. During this time, he was portrayed by the British as a cruel, tyrannical ruler who forced his subjects into religious conversion and tortured the captive British soldiers.  As William Dalrymple stated in one of his writings:

At the end of ten years’ captivity, one of these prisoners, James Scurry, found that he had forgotten how to sit in a chair or use a knife and fork; his English was ‘broken and confused, having lost all its vernacular idiom’, his skin had darkened to the ‘swarthy complexion of Negroes’ and he found he actively disliked wearing European clothes. This was the ultimate colonial nightmare, and in its most unpalatable form: the captive preferring the ways of his captors, the coloniser colonised.

It is believed that some of the French craftsmen who visited Tipu’s court contributed significantly to this fascinating automata!  The design of the automata was believed to have been influenced by a popular incident back then.

Here’s a look at how Tipu’s Tiger works:

When the bellows are activated, the dying man raises his hand in futile self-defence  emitting painful screams interspersed with the growls of the tiger!

Tipu’s French collaborations greatly worried the East India Company, for the Mysore cavalry trained by the French was the ‘best in the world’. Tipu Sultan was an ace millitary-strategist : he invented the world’s first rockets,  used the latest French-designed artillery, and even tried to establish his own Navy.  Did you know, he even invited Napoleon Bonaparte to India to help liberate the country from British control. All this made him a formidable enemy of the East India Company.

Tipu Sultan didn’t stop at just collaborating with the French though. He sent envoys to southern China to bring back silkworm eggs and established serriculture in Mysore—something that continues to remain a heritage-jewel in Mysore’s crown to date. The extent of Tipu’s vision spread across the Persian Gulf up till Istanbul where he sent his ambassadors to secure an overseas settlement and safe haven for his Navy.  Tipu Sultan was undoubtedly the most innovative and far-sighted rulers of his time.

The British won the Third Anglo-Indian War, which led to Tipu Sultan signing a treaty and allowing them to keep his 8-year old and 5-year old sons as hostages (scroll below to see Tipu’s tent where he signed the treaty). This incident was so humiliating that Tipu got the mechanical toy crafted.

While Tipu Sultan gave the East India company a tough, and equal fight, his resources sadly didn’t increase at the same rate as those of his enemies. He went down fighting bravely till the very end. In his own words:

“I would rather live a day as a tiger than a lifetime as a sheep.”

His death saw scores of people line the streets, ‘many of whom prostrated themselves before the body, and expressed their grief by loud lamentations’.  His possessions were gloriously divided amidst his enemies, including a beautiful tent:

A post shared by #MuseumsEveryday (@theheritagelab) on May 1, 2018 at 8:15am PDTTipu’s Tiger traveled to London in 1808, where it was displayed for the British public. It was an instant hit and went on to inspire art, poetry and literature. And that’s how, the Tiger of Mysore, Tipu Sultan became stuff of legend!

This M.F Husain Painting is Inspired by India’s most Famous Tiger : Tipu Sultan!