Yoga : A Story in Art

Born in India, raised by the world, the art of ‘Yoga’ has a fascinating story to tell.  In over 4000 years of it’s existence, Yoga is now a multi-million dollar industry and has taken many forms. Our favourite asana? The one in which you sit in front of your laptop, looking at art! So join in, relax yourselves and take a deep look into the evolution of Yoga – through art!

Yoga and the Divine

Perhaps one of the most popular subject of artworks in South Indian temples is that of Narasimha.  The Narasimha  avatar of Vishnu, sitting cross-legged with a yoga strap around his legs is a reference to an ancient story from the Bhagavat Purana. This sacred text relates the story of Vishnu who came down to earth, and taught his devotee Prahlad the art of Bhakti Yoga. Bhakti Yoga would in turn make Prahlad invincible against the powers of his demon father.

Dating back to the pre-vedic period, Yoga originally was a means of spiritually uniting with the Divine.  It is believed that Shiva taught the Seven Sages these super important secrets of passing from one world to another, without suffering.  A 17th century Pahari painting from the Chandigarh Museum illustrates this:

According to Yogic lore, Shiva dispersed 7 different characteristics into each Sage. Eventually, these became the 7 forms of Yoga that we know today.

Even though Yoga had it’s origins in Hinduism, it was soon adopted by other religions such as Buddhism and Jainism. Yoga’s teachings about the nature of mind had a profound impact on these religions which soon spread Eastwards and evolved in many different ways.

Eventually, around 150-200CE, the great Sage Patanjali codified the ancient practice in “The Yoga Sutras”. These sutras continue to be used as reference today, though the work focuses on one of the many schools of yoga that existed back then.

Temples in South India are rich with yoga-imagery. Here’s another example from the Vidya Shankara Temple, Karnataka : 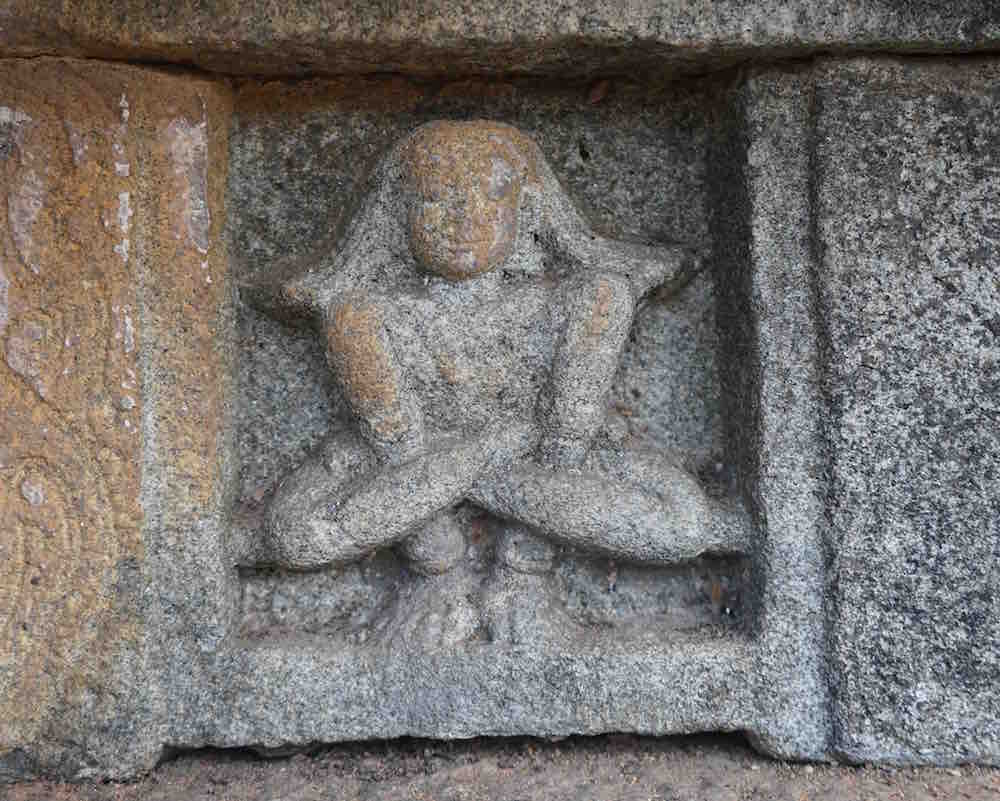 An interesting example of the Vriks-Asana (Tree posture) is part of the Arjuna’s penance / Descent of the Ganga bas relief.

The role of yogis in spreading the ancient practice is commendable, but the Mughals were not very far behind!

The Yoga Sutras were translated for Emperor Akbar but it was Prince Salim (the future Emperor Jahangir) who’s intense interest in yogic traditions developed in Allahabad. Allahabad was earlier known as Prayag – and was the meeting point of ascetics and yogis.

Did you know, that Emperor Jahangir commissioned the earliest known encyclopaedic Yoga-manuscript? Known as the ‘Bahr Al-Hayat’ or ‘Ocean of Life’ , this manuscript depicts 21 yogis performing seated as well as other complex asanas. But Jahangir wasn’t the only royal smitten by Yoga. Maharaja Ram Singh II of Jaipur too, is said to have been influenced  by Yoga. Here are two versions of him at his morning-worship! Another 17th century manuscript details out the Hatha-Pradipika, a Sanskrit manual on the practice.

This set of paintings, looks like a medieval version of asana-posters at a Yoga-school! Speaking of a school, here’s what the Lord Rama saw, when he entered a forest of Sages: The British documentation of Yoga though, lent it the “Exotic” tag.

Author Sophie Charlotte Belnos and her French lithographer husband J.J Belnos’ engravings are considered to be the earliest records of yoga-practice during the colonial era. A set of 24 graphic plates, they demonstrate different signs and postures. With so much yoga-inspiration from centuries of art, here’s hoping that we never stop striking the right pose! If you enjoyed this post, spread some yoga-love ! Good karma in this mobile-age is hitting the “Share button”!

Yoga : A Story in Art