A Gurudwara in Amritsar commemorates the Battle of Saragarhi 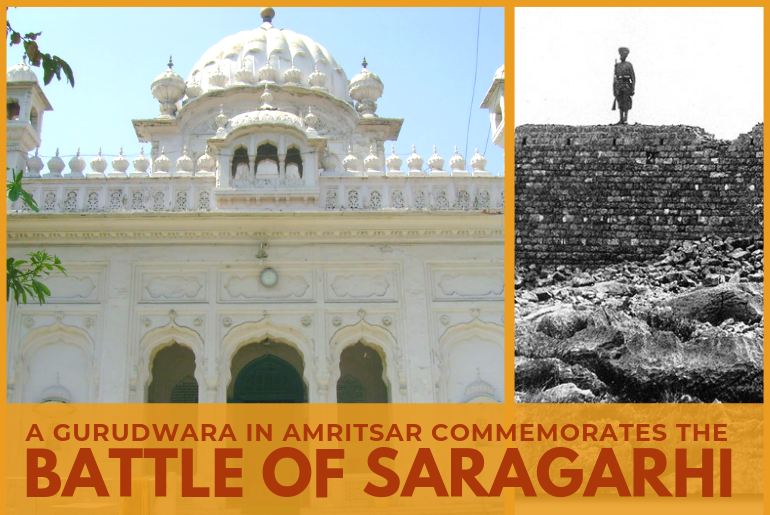 On the now-famous heritage trail of Amritsar, near the Golden Temple, stands the Gurudwara Saragarhi. The Gurudwara, was declared open by Sir Charles Pvez (Lt. Governor of Punjab) in 1904 is a tribute to Sikh courage and bravery.

On 12 September, 1897, 21 Sikh soldiers of the British-Indian army held their ground at the Fort Saragarhi against a massive onslaught of 10,000 enemy tribesmen. The odds stacked heavily against them (it was a staggering ratio of 1 soldier to about 500 tribesmen); the brave soldiers continued fighting till their last, giving enough time to nearby forts to prepare for attack.

Three Gurdwaras commemorate the bravery of these soldiers: one at Saragarhi (the venue of the battle); the second at Firozpur called the Saragarhi Memorial and; the third at Amritsar, called Gurdwara Saragarhi.

One of the most celebrated architects of the 20th century (and of pre-partition Punjab) Bhai Ram Singh, designed the Saragarhi Gurudwaras – at Amritsar as well as Firozpur. Today, the Gurudwara in Amritsar is a protected monument and honours the 21 martyrs.

The Battle of Saragarhi is one of the greatest last stands in history.

Recognised by UNESCO as one of the eight most important demonstrations of collective bravery, this tremendous battle rarely comes up in history textbooks.

An upcoming Bollywood movie will hopefully create more public awareness about this historic event. As a tribute to these forgotten martyrs, here’s the story of the Battle.

In the 1880s, tensions escalated between Britain and Russia, who battled over territories in Central Asia. To avoid all-out war, they reached a compromise in 1885. This led to the establishment of the Durrand Line (which is under dispute even today). The British adopted a policy to occupy frontier lands in Afghanistan to control this border. However, it still remained a volatile zone, with attacks from Russian forces on one hand, and on the other, by Pathan tribesmen who inhabited the area. Thus, there were several vulnerable posts along this border, including the one at Saragarhi.

Setting up of the 36th Sikh regiment

Under the command of Colonel J Cook, the 36th Sikh regiment was established. The troupe trained in Jalandhar, and then got posted to the Samana hills area [NorthWest Frontier Province – now in Pakistan] This was where Saragarhi was located.

This is the region where the British held on to forts originally built by Maharaja Ranjit Singh. Two of them were Fort Lockhart and Fort Gulistan, located a few miles from each other. Since one fort was not visible to another, the British built an outpost at Saragarhi specifically to aid communication via heliography (sending morse code signals by reflecting sun rays).

A Fierce Fight at Saragarhi

It was the morning of 12 September, 1897. 21 soldiers from the 36th Sikh regiment stationed at Saragarhi, found themselves surrounded by 10,000 Afghani tribesmen. The tribesmen wanted to take control of the outpost to hinder communications in the British Indian army, which would significantly affect their movement in the area.

As the tribesmen opened fire at the outpost, the Sikh soldiers retaliated. Under the experienced command of Hawaldar Ishar Singh, they continued defending the outpost. The brave soldiers waged on and lasted for seven hours in battle; continuing to fight even when outside help was not available! When they fell, it was not before they had slain 180 men from their enemy’s forces.

Significance of the Battle

The strong defence put forward by the Sikhs gave critical time needed by the two forts nearby to prepare themselves against the impending attack. The tribals would have allowed the Sikhs to pass safely if they surrendered. But they continued unabated.

They preferred to die fighting than to give up.

The Battle of Saragarhi delayed Afghan forces and allowed reinforcement to arrive. Because of the soldiers’ martyrdom, the British-Indian forces were able to repel what could have been a disastrous attack.

When news of the battle reached Britain, the British parliament stopped midway to give these martyrs a standing ovation.

Indeed, their bravery is worthy of remembrance even today. We actually have a reasonably accurate record of the battle since Hawaldar Singh carried on communication with the two forts even in the heat of war.

Ever since, September the 12th, is commemorated as ‘Saragarhi Day’.

For now, we hope Bollywood does justice to this awe-inspiring story!

Share this
Facebook
Twitter
Copy URL
Previous Article
How this statue of Shivaji at the Gateway of India replaced a ‘black horse’
Next Article
Nurmahal : Nur Jahan’s serai in heart of Punjab
Explore More In
History

Guru Nanak and the Sikh Noblemen

In Pictures: The Triumphal Reception of the Sikh Guns