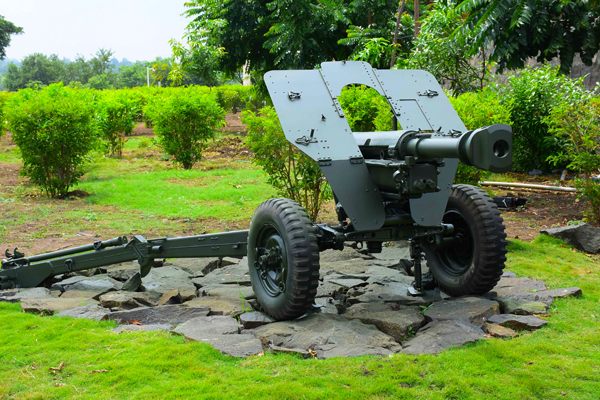 I have always felt that we do not know enough about the lives of our soldiers, their work profile, and we do not have a clue of the kind of sacrifices they make on a daily basis, or the challenges they live with.

In 2008, in a passionate speech, the then Army chief Gen Deepak Kapoor asked a very important question: “What have we done to increase the appeal of the army among the common masses?” His address largely focused on this question and went on to lament that the sacrifices of soldiers were often forgotten and the army’s good work was not highlighted among the people adequately enough.

As a result, Madhya Pradesh Chief Minister Shivraj Singh Chouhan declared the birth of the Shaurya Samarak. Foundations were laid in 2009, and it took about 4 years to complete the work. The library, displays, cafeteria etc. took a little more time.

Now finally, the Shaurya Samarak is ready to welcome people. As Prime Minister Modi inaugurates the museum today, here’s a sneak peek into it.

Pin it for Later! The Shaurya Smarak mainly of a 62-ft tall pillar (the Shaurya Stambh), around which names of the fallen soldiers have been inscribed on glass boards, a Museum, an open air amphitheatre, a cafe, and and information centre.

The architecture portrays the themes of life, war, death and victory over death in a style that promises to inspire the feeling of patriotism in the masses.

The 62-feet high Shaurya Stambh, rising from the ground, depicts the life of a soldier, built on a foundation of inner strength and courage. Their sacrifices at various stages of life and ultimately of life itself are displayed very vividly.

The red spot down below the pillar symbolizes blood. White, at the top exhibits life. Names of martyrs are inscribed at the back of the Stambh.

The Army signified by granite, The Navy in grey and the Air Force in white.

There’s an amphitheatre on the premises and a round patio “depicting a land inflicted with the ruins of war”.

The black square compound is meant to convey the “horrific reality of death and destruction”, while a lamp burning in the middle represents the “victory of eternal hope over despair”. Underlying the design of the war memorial is the message of Gita about the “ephemeral nature of body and immortality of the soul”. While the metal rods decorated with fibre optic lights represent this philosophy, the water below them signifies peace and purity.

Pictures of wars from ancient times to the modern period have been exhibited. Yes, that includes the wars of Ramayana, Mahabharata, and the famous War of Kalinga. Seventy photographs of wars after independence have been displayed at the Shaurya Smarak.

However, I think the highlight is the experiential exhibits which would allow visitors to understand the difficult terrains of the Siachen, and the war zones.

An Interpretation Centre has also been set up on the premises, designed as a semi-open congregation space with an information display system, explaining the essence of the memorial and providing a preview to visitors before they physically experience it.

A cultural history of our time along with pictures of gallantry award winners like Paramveer Chakra and Mahaveer Chakra has been depicted and different diorama of Army, Navy and Air Force along with small models of aircrafts, tanks and ships is the centre of attraction at this War Memorial. The stories of braveries is something you cannot miss. I think that is an important feature, because reading names doesn’t really allow you a glimpse into a soldier’s life!

The memorial claims to be the first of its kind in India and plans include a light and sound facility to narrate stories of bravery of the nation’s valiant soldiers, who have laid down their lives fighting enemies on the borders.

The Shaurya Smarak is an imaginative and colourful presentation of valour of Indian forces and a humble tribute to the martyrs, but what remains to be seen is the curatorial prowess in maintaining the Museum, connecting with visitors – not just in Bhopal and around, but across the country and beyond its borders.

If you’ve visited this Museum, leave your comments / thoughts in the space below!

MuseumJigsaw : Going to the Front by W.C Horsley